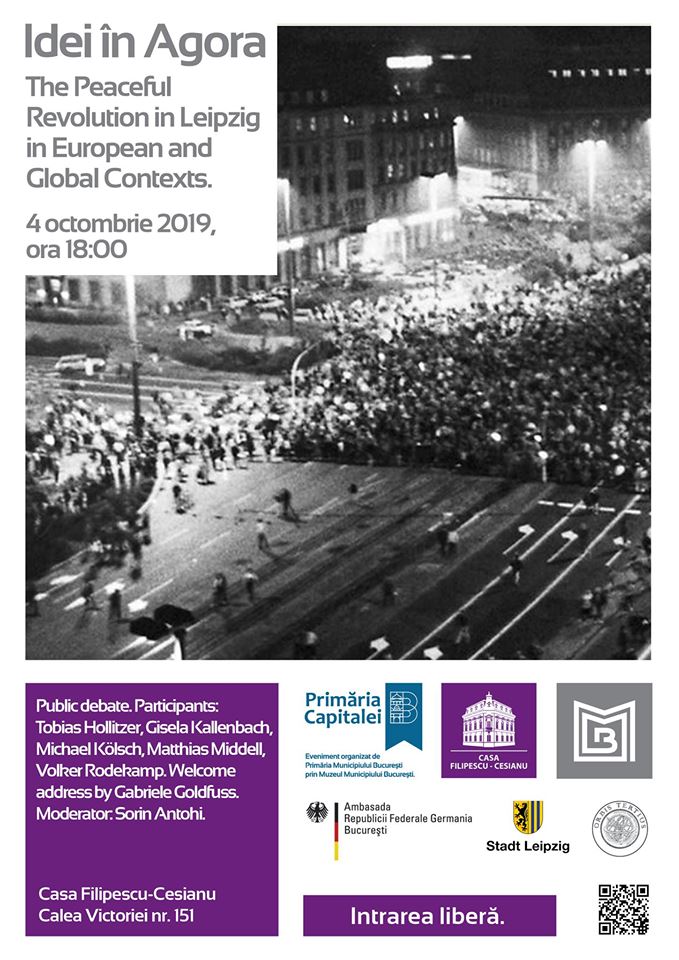 Our series opens its third year with two public discussions devoted to the revolutions of 1989 (the first was held on 1 October; see details below). These events are a continuation of our Ideas in the Agora Festival, which has already included a colloquium (on 23 June; see details below), also debating the theme of 1989 and of its aftermath. The evenings of 1 and 4 October feature invited guests from Leipzig, in the framework of a Leipzig Week in Bucharest organized by the City of Leipzig, the Embassy of Germany in Romania, and the City of Bucharest. I would like to thank all those, in Germany and in Romania, who made these events possible. This evening’s debate features a diverse–and in many ways symbolic–selection of speakers from Leipzig, with whom we shall explore the memory and legacies of that city’s Peaceful Revolution. Placing it in its European and global contexts, we shall bear in mind Romania’s Bloody ‘Revolutions’ and their aftermath, including their haunting afterlives – Sorin Antohi.

Gabriele Goldfuss is since 2001 the City of Leipzig’s Director of International Affairs. Prior to that she had studied Sinology at universities in Tübingen, Beijing, and Paris. After defending her Ph.D. dissertation, she has taught for seven years at the University of Leipzig.

Tobias Hollitzer (b. 1966) is committed to freedom and basic democratic rights not only since the Peaceful Revolution. Already as a teenager, he participated among others in church environmental groups for social change. On December 4, 1989, he was involved in the occupation of the Leipzig Stasi headquarters and has since been involved in various activities for a critical examination of the SED dictatorship and the work of the Stasi. He is co-founder of the Leipzig Citizen Committee, and since 2004 he is chairman of the advisory board of the Foundation for Saxon Memorial Sites. For his services, he received in 2015 the Federal Cross of Merit 1st class. Numerous publications on the Peaceful Revolution in Leipzig, the SED dictatorship, as well as the commemoration and remembrance policy.

Gisela Kallenbach (b. 1944) has worked for the City of Leipzig between 1990 and 2004, also serving as an International Mayor with the UN Mission in Kosovo (2000-2003). Member of the European Parliament (2004-2009), Member of the Saxon Landtag (2009-2014). Due to her social origin and to her Christian upbringing and socialization, the GDR regime has not allowed her to study normally. Instead, she had to work from the age of 16 and complete her education (laboratory assistant, translator from the English, engineer in chemical technology) through evening classes and distance learning. As early as 1982, she became active in various Leipzig civic movements, and from 1988 she was involved in the dialogue between Churches in the GDR, in ecological and civic (i.e., political opposition) organizations up to the Peaceful Revolution and beyond. She was awarded, among others, the Cross of the Order of Merit of the Federal Republic of Germany.

Michael Kölsch (b. 1958) is an architect who has studied at the Munich Technical University of Architecture. He moved to Leipzig in 1992 with his family, after working there since 1990 as a top executive with a residential building company. He is responsible for many civic and political initiatives related to the theme of the Leipzig Peaceful Revolution and he wants it to be considered an intrinsic element of the city’s culture. He served the city of Leipzig as a member of the local council (1994-2009), and in other capacities.

Matthias Middell is a Professor of Cultural History at Leipzig University. He earned his PhD in 1989 with a study on French counter-revolution at the end of the 18th century. His habilitation (2002) dealt with World History writing during the 20th century. He is director of both the Global and European Studies Institute and the Graduate School of Global and Area Studies at Leipzig University. As spokesperson of the Collaborative Research Centre (SFB 1199) he coordinates interdisciplinary work on processes of respatialization under the global condition and integrates research units dealing with individual world regions in a larger research programme devoted to the analysis of projects of globalization. In 2007 he was the Fulbright Distinguished Professor in Transnational History at Duke University and in 2011 a Fellow of the Netherlands Institute for Advanced Study. Since 2015 he is a member of the Board of the Comité International des Sciences Historiques. Since 1991 he serves as editor of Comparativ. Journal of Global History. Numerous publications in several languages.

Volker Rodekamp (b. 1953) was the Director of the History Museum of the City of Leipzig from 1996 to 2019. He has studied at the Braunschweig Technical University and the Westfalian Wilhelm University Münster. He received his Ph.D. at the latter, for his research in Cultural Anthropology, Ethnology, and Journalism, and for a dissertation on the changes in Westfalia’s traditional craftsmanship. Has worked in various positions at museums, in city administration, and has taught at universities in Münster, Berlin, and Leipzig. Former President of the German Association of Museums, member of the boards of numerous professional and academic organizations in Germany and abroad.

Sorin Antohi (b. 1957) is a historian of ideas, essasyist, translator. Member of the Academia Europaea. More at www.sorinantohi.org.

Idei în Agora / Ideas in the Agora is a program devoted to the analysis of the public spirit. It was initiated in 2017 by Sorin Antohi and supported by Adrian Majuru. It is conceived, planned, and hosted by Sorin Antohi. Realized by Muzeul Municipiului București (Bucharest City Museum), in partnership with Asociația Orbis Tertius / A Treia Lume. The encounters have various formats (dialogues, lectures, colloquia, seminars, public debates, etc.), proposing a dialogue between currents, movements, personalities, worldviews, theories, ideologies that may be in agreement, resonance, tension, or conflict. The encounters are (in most cases) filmed and live streamed on YouTube (https://www.youtube.com/channel/UCv5R2xEgA_M5nzwIUGl8kcQ), then archived at www.sorinantohi.org and http://muzeulbucurestiului.ro/idei-in-agora.html. See also https://www.facebook.com/IdeiinAgora/.

Public intellectuals and scholars, politicians and business people, students, the entire educated public attempt to understand together the world we live in. The only way possible: through the critical discussion of ideas. The invited speakers in the series have come mainly from Romania, but also from Armenia, Bulgaria, France, Germany, Great Britain, Hungary, Israel, Moldova, Turkey, the United States.

Any cookies that may not be particularly necessary for the website to function and is used specifically to collect user personal data via analytics, ads, other embedded contents are termed as non-necessary cookies. It is mandatory to procure user consent prior to running these cookies on your website.